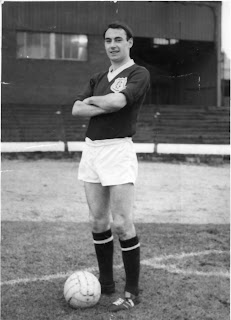 When I was a kid my mum and dad bought the children's book Masquerade by Kit Williams. The book was a beautifully illustrated treasure hunt which claimed you could reveal the exact location of a golden hare - buried somewhere in England - by deciphering clues contained in the pages. It sat on an old pine dresser in our living room, sandwiched between a couple of Roxy Music albums and David Attenborough's Life On Earth. Every once in a while I would lift it out and flick through the pages hoping the mystery would reveal itself to me. I used to stare at the picture of the golden hare for hours - looking back I think I must have been expecting it to speak to me. It never did.

One of the central themes of In Search Of Alan Gilzean concerns his self-imposed exile from White Hart Lane. When I first started writing the book, I had thought that Gillie's time away from the club had been exaggerated and wondered why it was such a big deal. On the face of it, it didn't appear to be all that noteworthy but the more I spoke to his former team-mates the more I came to realise that there was something else to his enforced absence. It wasn't just Spurs players, either. His former Dundee team-mates told similar stories. When the synopsis of the book was first released there were a lot of Dundee supporters who questioned the claims contained in it - likewise with the first chapter. They claimed that Gilzean was a regular at Dens Park and that he had been included in the SFA hall of fame. They were, of course, correct. But what they hadn't realised was that parts of In Search Of Alan Gilzean had been written long before he had reappeared at Dundee or before he had been inducted into the hall of fame. In many ways, one was a consequence of the other.

The reason for his time away from Spurs is less clear cut. I have my own theory - and like the location of Kit Williams' golden hare - it is carefully hidden in the pages of the book. You might find it on first read or you might read it several times and never see it. But the reason is in there.
Posted by James Morgan at 16:45