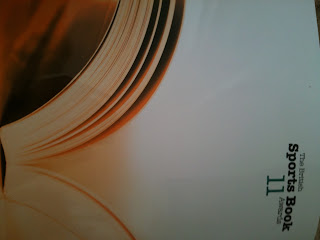 The life of an author is invariably one of managing ever increasing expectations without wanting to appear hubristic. Not content with torturing myself mentally during the writing of In Search Of Alan Gilzean, I have spent the interim period doing it all over again. First, you hope that people will buy your book, then you hope they will read it and, then, if that's not enough, you want them to like it. For the writer, though, of greater concern is those that have not enjoyed the work. What was it that those who criticised it did not like? What could have been done better? What would I change if I had the chance to write it all over again?

These were the questions that occupied my mind in the days after last week's British Sports Book Awards. You will recall that In Search Of Alan Gilzean was nominated in the best football book category for the event at The Savoy last Monday evening. It didn't win but that didn't stop the six of us (the remaining UK-based members of BackPage Press, myself and our wives and a girlfriend) from having a long-overdue and very boozy post-publication party. It was clear we were going to enjoy our night when a tray filled with fine champagne was waved in front of our noses and we embarked on some celeb spotting. Mike Atherton was there, as was Gabby Logan, but perhaps the most impressive famous face on show was that of Brian Moore who, in the flesh, is one of the scariest men I have ever set eyes on.
Moore would later melt upon winning the best autobiography award, his voice cracking with emotion as he recalled the circumstances behind why he wrote Beware of the Dog before admitting that the sportsman in him meant he would have been 'gutted' had he lost. His gallant and eloquent summation was that, in any case, it was only someone's opinion that he was deemed the winner.

The positive news for us was that we had been selected as a nominee rather than having submitted the book for shortlisting. To me this was evidence that we had a chance and when the nominations were read out there was more to be confident about with the revelation that "the winning book represented a personal odyssey". And that "it was a story about a town (Coupar Angus, surely?) a city (it must be Dundee) and about a club (ah bugger it, it's the book about Leeds United, isn't it?). I'd marked down Anthony Clavane's Promised Land as the live outsider when I'd first seen the list of nominees – along with Mike Calvin's Family which was the bookies favourite – and so it came as no great surprise to see him lift the award. But I won't lie, there was a pang of envy when he mounted the steps to collect it. There was surprise, too, when WH Smith picked up the best retailer award. Not least from The Independent's Stephen Brenkley here: http://www.independent.co.uk/sport/cricket/on-the-front-foot-little-chance-of-india-having-another-look-at-referral-system-2284342.html who presented the cricket award and noted the lack of the sport's books available in the retailer's stores. I have had a similar experience with Smiths. Gillie has not been stocked in my local store in Hamilton since publication and that to me seems like something of a missed opportunity, not least when they have books about other former Tottenham players such as Darren Anderton and Steve Hodge, who also just happen to be English. But I digress. 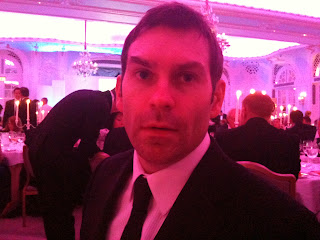 The rest of the evening was spent chatting with other authors about their experiences. Tom English, who won best rugby book for The Grudge, a superb socio-political account of the 1990 grand slam decider between Scotland and England told me he conducted over 100 interviews in the writing of his book and during one fortnight, specifically taken off work to clock up some words, he wrote "9000 only to throw 8000 of them away". Clyde Brolin asked how long it had taken me to write Gillie. He was surprised to discover that it had taken me just over a year. His book, Overdrive, had taken five. My theory on the writing process is that there is no right or wrong time-span. It is a nebulous concept and relates to the time needed to tell the story as fully as possible but also the conditions that govern your day-to-day existence. I simply had to have my book finished by the deadline imposed. The question is not would it have been different had I been given more time but rather would it have been written? There was also the opportunity to meet the prolific Spurs author Martin Cloake, who had given Gillie a very favourable review on his blog http://martincloake.wordpress.com/ and with whom I'd enjoyed a correspondence in the run up to the awards. I will confess that I took far too much pleasure from Martin's 61: The Double book winning best illustrated title and Tom's The Grudge taking the rugby gong, perhaps because Martin is a fellow Spurs man and Tom is a fellow Irishman or perhaps because I was all too aware that it might be the closest I would get to winning myself. And thus it proved. As reality set in, I downed more and more wine and suddenly I was smiling. Gillie would have been proud.

When I woke the next morning I felt 'gutted', just like Brian Moore might have done had he not won. But, as I reconsidered his words and the effects of the previous night's drinking finally started to lift, I told myself there's always next time . . . I've already started planning for it. Let the self-flagellation begin.
Posted by James Morgan at 14:20 2 comments