For those of you who missed the launch of In Search Of Alan Gilzean, there is a second chance to watch the great man in action and hear stories about his life at Dundee and his early days in Coupar Angus. Pat Liney, the goalkeeper in the 1962 league-winning team, will be in attendance once again as will former schoolfriend Ron Ross, the former sports editor of the Dundee Courier, who features heavily in the search. Both men were among the few who actually witnessed Dundee's epic 5-1 win over Rangers at Ibrox in which Gillie scored four times. Indeed, Ron travelled through the fog to Glasgow in the company of Billy Forbes, Gilzean's cousin. Pat, of course, famously had to ask Alec Hamilton, the Dundee right-back, what the score was because he couldn't see Rangers' goal area from his own.

The night starts at 8pm on Saturday, October 23rd in the New Picture House in St Andrews and tickets, costing £5 but entitling you to a £2 discount on the book, are available here: http://bit.ly/9WAHyn 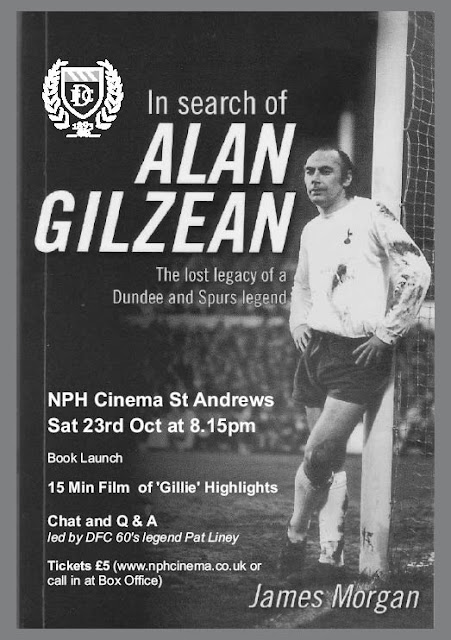