Dates In The Diary 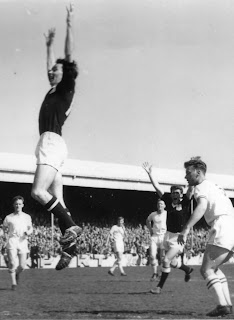 Back in the days when In Search Of Alan Gilzean was just a few half-thought-out ideas and a series of scribbles in my notebook, I toyed with the idea of writing it as a diary. Back then, I was daunted by the size of the task facing me and I was finding that the most interesting things about Gillie were what other people had to say about him and so it seemed the most natural way of conveying the idea that I was embarking on a voyage to find him.

As time went on however, I came to the conclusion that, in the absence of a single substantive document of his career, there was a need for a chronology of his life too. The result is a book which I hope weaves my search and his life together. The proof of the pudding, I suppose, will be in the reading.

Anyway, I thought it might be quite nice to give readers a flavour of what kind of things I was writing about when I started the diary. For point of reference, all dates refer to 2009.

Friday 24th April
There's an email from Martin Cohen in my inbox. Martin played for Highlands Park for many years and was at the club during Gilzean's time there. Reading Martin's player biography on the Highlands Park website makes me think he's almost worthy of a book himself. Today, he is a director of the largest paint outlet store in South Africa but back in the day he was an excellent midfield player who spent a season alongside George Best at Los Angeles Aztecs and won a number of domestic trophies at Highlands Park. Also on the club's website there's a link to a cutting from the Durban-based South African Soccer Monthly which claims that on one family holiday to Durban, the boy Martin badgered his dad to take him to the offices of the newspaper so that he could look through its archives. Under the strap and headline “Soccer Monthly knew Martin Cohen would be THE YOUNGSTER WHO MADE THE BIG TIME” the article explains that Martin “would spend days of his holidays doing odd jobs around the works with a fervent hope that some of the local soccer stars would drop in and if so he would hold them in starry-eyed conversation. His day was made when this would happen.” and “. . . when Martin hit the top there were knowing smiles all round and remarks of 'I told you so' . . .”
One paragraph, in particular, stands out: “Top honours did not elude him for long, and his most memorable moment to date is his goal for the SA White XI against SA Black XI.” At first, I'm staggered by this revelation. Two teams divided exclusively by colour, playing against each other? However, almost immediately, I'm struck by the realisation that it's not that far removed from an entirely Protestant Northern Ireland XI playing against a wholly Catholic Republic of Ireland XI.
Martin has asked for my telephone numbers so that he can give me a phone. Those will be expensive phone calls. I begin to wonder just how big the biggest independent paint retailers in South Africa is.

Tuesday 27th April
Things I have learned today: Alan Gilzean was the last Dundee player to complete military service. Indeed, upon making his debut for the club against Motherwell in September 1959 he had to dash back to Aldershot military base were he was stationed. Five months later he scored his first goal, a header in a 3-1 win over St Mirren. Given that he would become renowned for his aerial prowess, it was a sign of things to come.
In 1962, he played a game against Falkirk wearing sand shoes because the pitch was icy. He scored twice.
I'm reading a book about the Dundee title winning team of 1961-62 and I've just realised the magnitude of the size of the task I have undertaken. I had no knowledge that he had been on military service (although it should have been obvious to me since conscription didn't end until 1960) – it's just another area of Gillie's life that will need to be accounted for. Meanwhile, I'm starting to have nagging doubts about hagiography and the corroboration of evidence: one person's word is not gospel. Craig Brown told me that Gilzean would drive to training and matches because he lived nearby in Coupar Angus. The book claims that he lodged in Dundee.
I'm starting to fill in some of the blanks about his days at Dundee, though. Gilzean joined Dundee as one golden era for the club was coming to an end and another was just about to start.

Reading back over these entries, they seem fairly banal now. But back then they seemed like major finds. The big details were still to come though and as I picked up more and more from interviews I found myself turning to the diary less and less. Nonetheless, there are a few gems in them and I'll post more entries in the coming days.
Posted by James Morgan at 16:30